Now positioned inside The Great Stupa of Universal Compassion. Viewings are available during all our normal operating hours and as part of our tours. 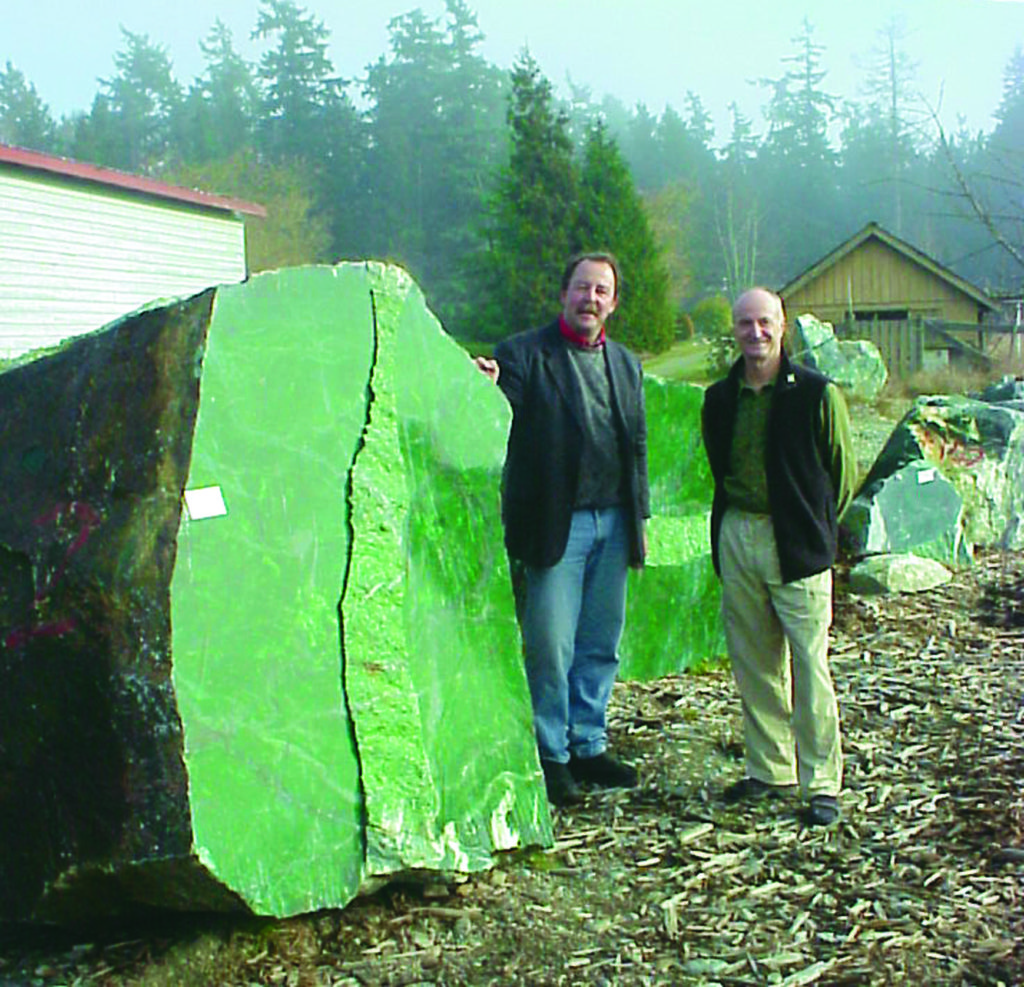 Nephrite Jade – The Stone of Heaven

Nephrite or “true” jade has been prized in civilizations throughout Asia, South America and the Pacific since the beginning of history. Wherever jade has occurred people have found value in it as a tool, a healing stone and as a connection to the gods. The hardness and toughness of jade was first exploited for tools over 5000 years ago.

Jade conjures the magic of legend, especially in China where Nephrite Jade was known as the stone of heaven. Ancient Chinese myths told of jade being plucked from the rainbow and cast down to the earth. With such importance attached to it, the Chinese have traditionally valued jade above other worldly possessions.

Today the healing quality of jade is still valued around the world.

In late 1990s a remarkable new find of jade was discovered in the arctic regions of Canada. It contained stone so green, clear and vibrant that it was unlike any other jade ever found in North America. Inspired by its surroundings it became known as “Polar Jade”.

Under scientific investigation Polar Jade has been found to be harder than any other variety of Nephrite jade. It shines to a brilliant polish which is one reason why there was an overwhelming demand for Polar Jade as a gem for precious jewelry and for carving fine art. Polar Jade was always in very limited supply and is now considered to be unavailable.

Polar Pride – the find of the millennium

In the year 2000 the gem world was amazed with the discovery of the largest boulder ever found of gem quality polar jade. This 18 tonne boulder was named “Polar Pride”. It was immediately dubbed “the find of the millennium”.

Internationally known author and gemologist, Fred Ward in his book “Jade” says of Polar Pride: “Without doubt, this is the largest piece of gem grade jade found in my lifetime and perhaps the millennium. Without going into too much in the geological formation, it is a very, very rare occurrence.” 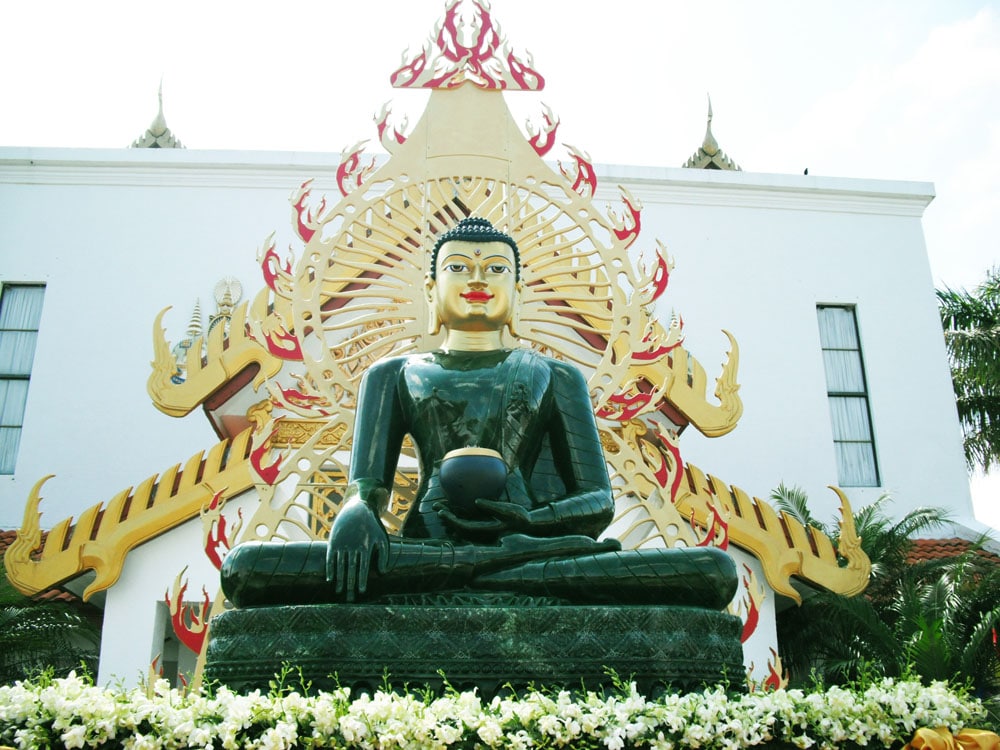 Modelled on the most famous Buddha in the world

The Buddha inside the Mahabodhi Stupa in Bodh Gaya (India) is the model for the Jade Buddha for Universal Peace. This Buddha was chosen because it is recognised by most Buddhists as the closest likeness to the Buddha himself. The Mahabodhi Society at Bodh Gaya gave special permission for a detailed photographic study of the statue. These photographs became the reference upon which the sculptors and carvers created the Jade Buddha for Universal Peace.

Five years in the making

The Jade Buddha project began in early 2003 when Ian Green received a phone call from Cheyenne Sun Hill, a jade jewelry designer in California. Mr Sun Hill explained he was a Buddhist and had been looking for a temple to create a jade Buddha from Polar Pride.

A few months later Ian Green met with Cheyenne and Mr Kirk Makepeace, the President of the Canadian jade mining company for his first look at Polar Pride. Ian then spoke to his spiritual master, Lama Zopa Rinpoche about the jade boulder. That night Lama Zopa had a vision that the boulder would become a Buddha that would illuminate the world. Lama Zopa then told Ian Green “you must turn this jade boulder into a Jade Buddha as a holy object offer to the world”.

The next 5 years were devoted to raising the funds to pay off the purchase of “Polar Pride”, selecting the best jade master carvers, shipping the boulder to Thailand, preparing a total of 4 prototypes, carving and polishing the Jade Buddha. The Jade Buddha was completed in December 2008.

The Buddha has been named the Jade Buddha for Universal Peace in the belief that this Buddha will inspire all beings to follow the peaceful path. Lama Zopa Rinpoche has said that this Jade Buddha “Will illuminate the world and bring inconceivable peace and happiness and help prevent the destruction that is happening so much in the world, including war.”

The project was first blessed in Northern Thailand before the carving process began. Phra Chuwit Thammavichitdet led a group of five monks who blessed the jade boulder, the carvers and everyone who would work on the project.

When the Jade Buddha was completed in December 2008 it was blessed by Venerable Krubar Boon Choon Yamsunkhvaro in an event attended by 100,000 people on the Thai – Cambodian border.

The Jade Buddha for Universal Peace was formally consecrated by His Holiness the Dalai Lama on December 1 2009 at the Sydney Entertainment Centre, Sydney Australia.

The Jade Buddha is a great international achievement; it commenced with the discovery of a rare 18 tonne boulder of translucent jade in Canada in the year 2000; it is based on the famous Buddha from Bodh Gaya, India; the Buddha prototype was designed by an Australian and a Thai sculptor; it was carved by skilled craftsmen in Thailand and the face was painted by a master painter from Nepal. 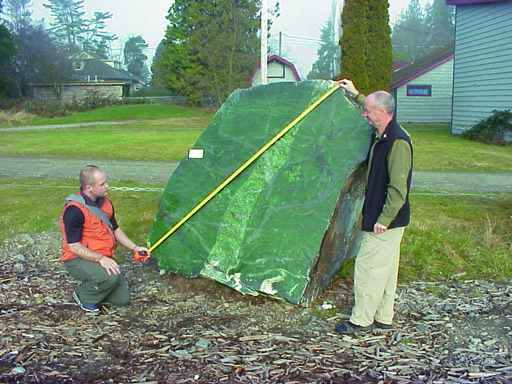 Commencing in March 2009 the Jade Buddha for Universal Peace toured the world with the objective of inspiring everyone who sees it to find peace in their family; peace at work; peace at school, peace in their community and most importantly peace in their heart.

The Jade Buddha tour travelled to over 120 cities in 20 countries and up to the time when the tour concluded in Korea in February 2018 an estimated 12 million people will have come to see the Jade Buddha for Universal Peace.

In May 2018 the Jade Buddha for Universal Peace came to its home at the Great Stupa of Universal Compassion in Bendigo, Australia where it will be a symbol of peace to inspire the world for millennia to come. It is planned that the Jade Buddha will again tour the world in years to come.

Every piece of Polar Pride is used

The workers at Jade Thongtavee were instructed to carefully collect every chip that came from Polar Pride during the carving process. These pieces of jade have been transformed into unique mementos of the Jade Buddha for Universal Peace which are available at The Great Stupa and online. 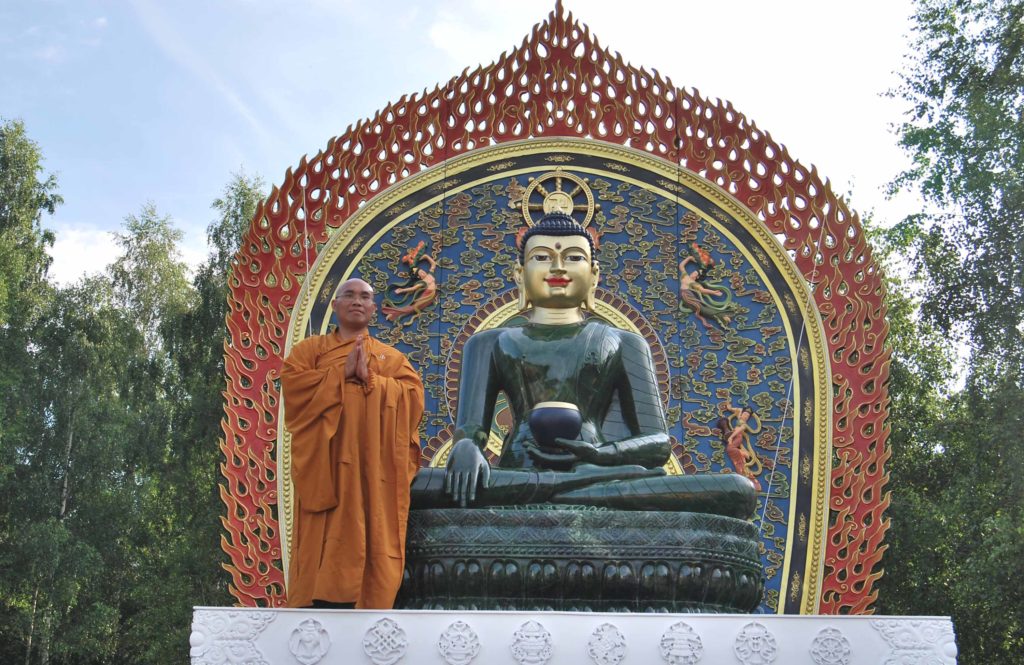 One of the world’s great jade Buddhas

There are several large jade Buddhas at Buddhist pilgrimage places around the world. Famous jade Buddhas exist at the Shwedagon Pagoda in Myanmar, Wat Phra Kaeo Temple of the Emerald Buddha in Thailand and at the Jade Buddha temple in Shanghai. The Jade Buddha for Universal Peace is destined to take its place beside these Buddha statues as one of the most famous and revered in the world.

Mandala Lights around the Jade Buddha

The origin of these lights is unclear and several different opinions have been put forward as to their cause and significance.

Why did we paint the face of the Jade Buddha?

The face of the Jade Buddha was painted in pure gold so that the features of the face were much clearer and as a result more inspiring.

The original statue in Bodh Gaya is painted and indeed it is a Buddhist tradition for statues to have their face painted in non-reflecting gold. It is considered to be inauspicious to see your face reflected in the statue of a Buddha. The face was painted by Rajeesh, a renowned Nepali artist.

What is the Buddha completion ceremony when on tour?

After the Buddha is set up in each venue a completion ceremony is conducted which sees the installation of three final aspects of a Buddha:

The Buddha’s bowl symbolises the begging bowl used by the Buddha, this bowl also signifies the bowl which holds wish-fulfilling nectar. The bowl is bountifully full with fruits or other items.